What’s all the fuss about?? 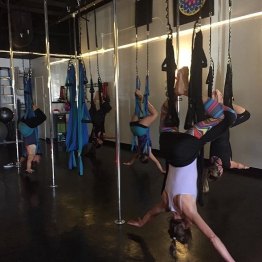 Besides being downright awesome?  Let’s start with the basics. Aerial yoga incorporates traditional yoga poses and aerial adaptations of traditional poses using a swath of soft parachute fabric called a hammock for support. Some, but not all, systems also have handles. The hammock is suspended from the ceiling, supports you in the poses, and allows you to get deeper into stretches without feeling forced.

It also means you can do many supported inversions without having to be skilled in headstands and handstands. Being upside down, supported by the hammock, can help lengthen your ligaments, relax your muscles, and decompress your spine. Quite frankly, it feels sublime. Recently, we did shoulder stand using the hammock…we looked like little bats and it felt so amazing on my neck!

What makes it so special?

One of the things I love most about aerial yoga is the cocooning. Imagine spending shavasana floating above the ground, wrapped in your hammock, feeling completely weightless and cozy. *sigh*

And it’s just so much fun! Fly in superman, swing in pigeon, feel supported in partner tricks, or flip in and out of poses for some extra strength building and excitement. This summer my studio started offering a strength building class using the aerial yoga system…holy smokes! It’s amazing what you can do with these hammocks! 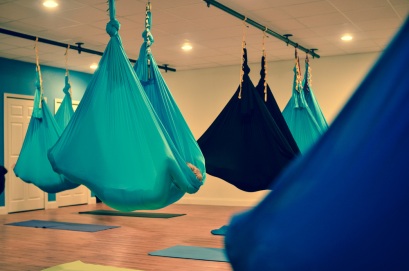 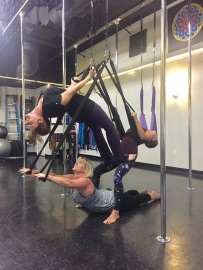 It also makes many poses more accessible. I’m not super flexy, so this is really important to me. Standing splits, for example, is one that I love in the hammock, but not on the mat. Being able to hook my back leg on the hammock both supports me and allows my body to ease into the pose. Backbends are supported, inversions are safe and proper alignment in them is easier to find. I’ve been working with supported handstands while I build up my wrist strength and ability to hold the pose. And I can do it without the fear of falling, which is fantastic!

Aerial yoga increases your spatial awareness and proprioception – “an awareness of the position of one’s body”. It may sound simple, but go upside down and see if you intuitively know which way to take your leg to bring it “forward” or “towards your head”. Training ourselves to be more proprioceptive helps not only with balance, but also with making movements more precise. Additionally, our bodies use proprioceptive information to protect muscles and joints through unconscious stabilization and proper positioning to prevent overstretching and injury.  This is a functional life skill that improves with practice and will serve you well in the long run. 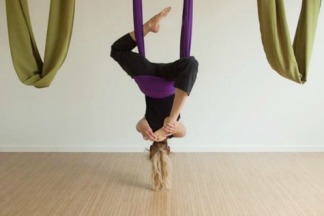 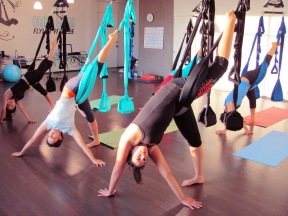 And the health benefits?

Aerial yoga has many of the same benefits as traditional yoga including improved circulation and digestion, increased balance, strength and flexibility, as well as back and stress relief.

Additionally, aerial yoga removes much of the stress of gravity, and allows yogis of all levels to try out a multitude of poses, including inverted poses, without the risk of over-stressing joints.  Longer inversion time means greater spinal decompression and improved back health and flexibility. Suspension in the air also releases tension on the bones and muscles, increasing overall flexibility. 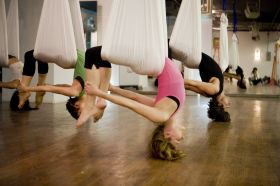 Aerial yoga is also a great core workout because you have to engage your core muscles to balance and stabilize yourself during the majority of class. A great way to gently build strength.

Exercise in general boosts your brain’s production of endorphins and dopamine, but some physiologists think that being suspended above the floor, especially upside down, during an aerial yoga class may help your brain release even more serotonin than usual, leaving you feeling fantastic. Without question, I feel fabulous at the end of each aerial yoga session. If you think about it, your stretching, strengthening, lengthening, and lightening the load on your body…how could you NOT feel amazing after all that!?

So what are you waiting for?

Go give it a try!  You don’t have to be an experienced yogi or an acrobat to enjoy aerial yoga. And really, what do you have to lose besides loads of tension and stress? If you live in the Jacksonville area you can find me hanging upside down at Aura Aerial and Yoga in Atlantic Beach 🙂 See you there!